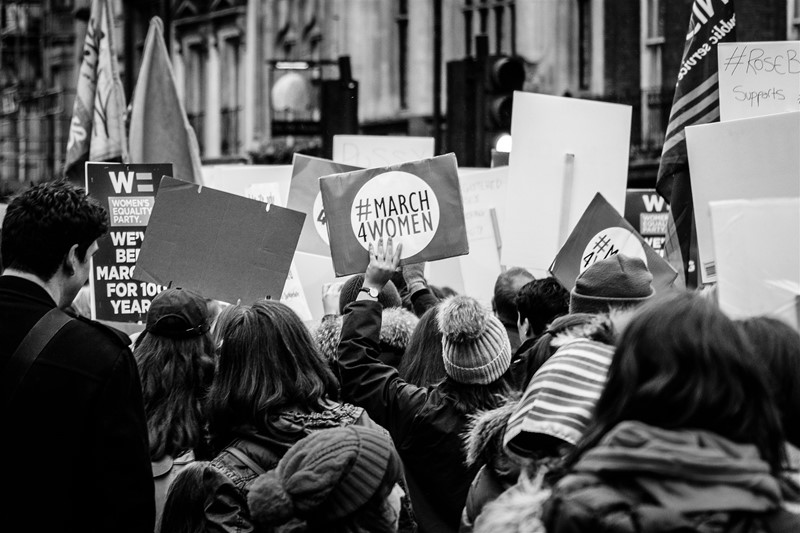 Yesterday, Mike and I were in downtown Denver to visit a friend in the Denver trauma hospital. On the way, we stopped by Whole Foods to get some snacks for our friends as they pass the long hours in the hospital.
“Why are the streets so busy on a Saturday morning?” we asked as we checked out.
“Oh, it’s the women’s march,.” the cashier answered.
Another cashier said, “It’s not against Trump, it’s for women.”
“No, it’s for all human rights,” chimed in the lady in line behind us.

Not long after that, I got this email from a Java with Juli listener:

I was hoping to see a podcast this week covering a discussion about the Women's March that is taking place today, January 21st.

I would love to hear your thoughts on it. It's not too late to talk about it if you do decide to do an episode on this topic! I consider myself a Jesus-loving, Pro-Life Feminist who wants to stand for what is true about not just us as women, but equality of each race, of the poor & wealthy, of the dignity of each being created in His image. But there is tension in joining the march when my beliefs do not embrace abortion or the LGBTQ as is generally being displayed. I want to, as a Christian, stand beside those that may not be, seeking change and truth. Where is our place as Christian women in what will continue to be a necessary conversation spurred on by such actions?

I don’t typically speak into questions like this one that have a political aspect to them because I don’t simply want to share my opinion on what’s happening in our country. There are enough opinions flying around in the news and on social media.  Who needs one more? However, I was laying in bed praying this morning, and couldn’t get this woman’s question out of my head. I began asking the Lord, “What would you have done? What would you have told your disciples to do in this situation? What would you have us do?”

Although the marches are over, the question this woman is asking is still relevant. The next four years will likely be filled with debates, riots, marches, and division in our country.  I would like to share three things based on the life of Jesus to consider as you interact with the political opinions, discussions and divisions of our time.

Unless you are a close friend or family member of mine, I sincerely hope you don’t know whether I lean toward democrat or republican, a liberal or conservative, a feminist or not. I don’t want to be known or identified with any label or group except for “Christ follower.” Why? Because every other label includes both things that honor God and offend Him.

Just as my conversation with the ladies at Whole Foods demonstrated, people participated in the marches yesterday for variety of reasons and causes. If you marched, who knew whether you were marching for abortion rights or in solidarity with minorities? What does it mean to be a Christian feminist or Christian republican? Can’t we just stop at Christian, and stand with Jesus?

Jesus lived in a time when most people accepted and chose labels. During his day, people were known as Pharisees, Sadducees, Zealots, and Herodians, just to name a few. The Jewish social structure of His day had more cliques than a suburban middle school. Certainly there were things that each group stood for that were righteous and God-honoring. I would guess that there were even marches and protests among these groups. Yet Jesus never indicated that He liked one group more than another. He and His disciples never accepted any label. Should we?

Jesus demonstrated the courage to belong nowhere yet minister everywhere

We see in the life of Jesus that He wasn’t afraid to interact with and at times offend everyone. He hung out with “sinners,” but spoke of hell, judgement and the need to turn from sin. He taught the religious leaders, but rebuked them for their hypocrisy and greed. He interacted with everyone, but didn’t belong to anyone.

Being part of a group or movement makes us feel accepted. We all want to belong to something and to link arms with people who have a common cause. Yet there is no group in this world that we can fully belong to without compromising our call to follow Jesus. Even Christian groups can fail to represent the heart of Christ in the truths they stand upon and how they articulate those truths.

Yes, you should be part of a church body and strive toward unity, honoring God with one voice (Romans 15:6.) But let’s not forget that the head of that body must be Jesus Christ. When a group veers from Christ’s truth and love, we must have the courage to speak out even if it means going against the grain of those we love. If your right-leaning Christian church speaks with tones of racism or hypocrisy, will you humbly correct them? If your left-leaning Christian group comprises biblical truth in the name of “love,” will you speak out?  Do you have that kind of courage?

Certainly there were many injustices and social ills in Jesus’ day. He spoke to some of those, calling His followers to be full of mercy and to speak up for the oppressed. Yet Jesus did more than speak… He acted.

If you long for social justice, demonstrate your convictions by action. Find the poor, the oppressed, the sick, the orphans, and the single moms around you and show them the love of Jesus. If you “hunger and thirst for righteousness,” turn off Fox news and ask the Lord to cleanse your life of everything (including judgement and bitterness) that offends our holy God.

Above all, let’s be united as Christ-followers in prayer. Instead of an all-day march, what if we spent that time praying and fasting? Which action, marching or prayer, calls on the power of heaven to heal our wounds and bring revival?

To march or not to march isn’t the question we should be asking. We live in a time of hatred, division, and arrogance, all wearing patriotic and social justice labels. To embrace any of those labels, we miss the point of why Jesus has set us apart to do His Father’s will. Oh Lord, unite us as your people of every race and country, male and female, rich and poor, young and old. May we be united in our love for you and our desire to see you alone high and lifted up. May they know we are Christians because of the way we love one another.