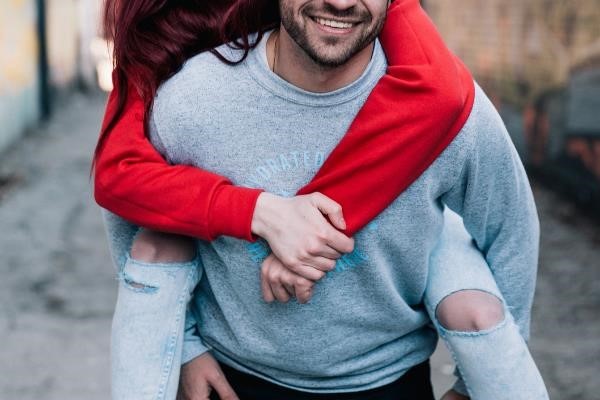 Are you dating someone and wondering if the red flags you see are reason enough to break up with him or her? Do your friends and family have concerns about the relationship? If you feel in your heart that something is just not right, don’t ignore it. It might be the Holy Spirit.

Does God care who you date? “The survey says, Yes!" Of course God cares! God is the perfect Father. What good father doesn’t have an opinion about who his child is dating? But our Father also gives us freedom (and boundaries) when making this decision.

I'll let you know up front: I'm going to be unfairly picking on the guys in this post. But any guy or girl you read about here could easily be the opposite gender.

When a past boyfriend and I were early on in our dating relationship, I saw red flags. I kept trying to convince myself that the red flags weren’t that big. The truth was that I knew God did not want me in the relationship. In my selfishness, I stayed. I didn’t care what God was revealing to me! I thank God that a few months later I obeyed Him and ended the relationship. It was not easy and there were many nights of tears. But, looking back, I can see it was the best decision.

Many women go back and forth over, “Is this big enough to break up over?” I talked with my friend, Kate, who is in her 40s and desires to be married. She shared that being a Christian single in her 40s in the American church is drastically different than being single under age 30. There’s very little talk about navigating singleness, leaving women to wonder, "Should I settle?"

Friends have shared countless stories with me about the men they've dated and the red flags that were revealed in their relationships. Here are a few examples:

"The guy who wouldn't date me because I am a virgin and he was afraid I wouldn't like sex."

"The men who are divorced and blame it 1000 percent on their ex-wives who 'changed,' 'had issues,’ or ‘wouldn't change.'"

"The guy with $100K in credit card debt who doesn’t see a problem with living financially irresponsibly."

"The men who thought that waiting to be married to have sex was old fashioned or not possible."

Which red flags are big enough to break up over?

1. The person manipulates you or is abusive.

Is there any physical, emotional, verbal, sexual or spiritual abuse? Run. Some forms of abuse are not as obvious as physical abuse, but they still violate your boundaries.

My friend Lindsey shared, “When my husband and I were dating, we lived in different cities. Because we wanted to spend weekends together, it often meant that I would stay in his city. I worried about overstaying my welcome on friends' couches and started enjoying overnights with my boyfriend. When we inevitably began to cross our physical boundaries, I told him that I no longer wanted to spend the night. He pushed back. I gave in. This became a cycle. When we married, and I struggled with sex, I knew it was because I was resentful toward him for not protecting my integrity when we were dating. It was an incredibly hard thing to work through in our first year of marriage.” If a person pushes you to compromise your boundaries (personal, sexual, or emotional), it’s time to have some hard conversations. Depending on how those go, consider breaking up.

2. They don’t love God or care about your relationship with God.

Scripture warns us to not be unequally yoked with unbelievers (2 Corinthians 6:14) This may not seem like a big deal in dating, but it will impact your marriage and your family. The Bible also warns us, “Do not be misled: Bad company corrupts good character.” (1 Corinthians 15:33 NIV) You are more likely to walk away from God if your partner doesn’t care about God. It is easier to lose faith or doubt God’s word when your partner doubts God’s word.

Do you see patterns in his life where he doesn’t really care about your relationship with God—or his own personal relationship with God? Maybe he encourages you to skip church or he never wants to join you at small group. If a person doesn’t encourage you to grow closer to God while dating, it is very unlikely that they will start encouraging you to grow closer to God when you’re married. Remember, dating is the time that a person is trying to win you over, so if you are experiencing this issue (or any other issue), it will probably get worse when they are not trying as hard!

3. He doesn’t listen to or care about your feelings.

My friend Elsie loves to host others and bake for them. Her boyfriend, Dan, got frustrated when she wanted to plan recipes, shop, and cook for a Superbowl party they decided to host together. He’d wanted to keep it simple;  frozen appetizers, potato chips, crackers, sliced cheese and a veggie tray. When Elsie shared that his approach takes the enjoyment out of hosting the party for her, Dan accused her of being selfish. Didn’t she realize how much more time and money it would cost to do it her way? By the time the argument was over, Elsie felt unheard and unloved.

Every relationship will have conflict, and we all have blindspots. However, when you experience a pattern of feeling unheard or talked over, that’s a red flag.

4. Your best friends don’t support the relationship (or you’re hiding it from them).

If your closest friends are questioning if you should continue seeing someone, listen to their opinions. If it’s something trivial (they don’t like your boyfriend’s jokes), that’s not a reason to break up. But if they are worried that the person does not treat you right, listen up.

And if you find yourself fudging the details when you talk to your friends or family about the person you're dating, start to pay close attention to what you're sharing. Are you making things sound better than they actually are?

Jackie shared about dating a guy who had just ended a very long-term relationship. She hid the fact that she and her “friend'' were spending significant time together because she knew their mutual friends would tell her it was a mistake. Jackie confessed, “I didn't want to hear that. We sneaked around behind our friends' backs for a few weeks before I was left with nothing but heartache when his ex-girlfriend came back into the picture."

5. You don’t plan to marry him or he lacks commitment.

If you know without a doubt that you won’t marry someone, why are you dating him? This does not mean that you have to decide early on if you will get married. But if there is some reason you wouldn’t marry him, don’t continue dating him.

The person you're dating should be asking themselves the same question. If they can't see themselves marrying you, why are they dating you? Kelly shared, "I once spent months dating and falling in love with a man who was very attentive, but never actually told me what his intentions were. Foolishly, I didn't ask. Even worse, I was daydreaming about marrying him!  Months later, when he got back together with his ex-girlfriend (with whom he would eventually marry), I was devastated. I know what you're thinking: It's my own fault. There's truth in that. But in the midst of a relationship that I wanted so badly, I didn’t want to ask any questions that might end the time and attention I was receiving from him. This is an easy trap to fall into. Ask your friends to help keep you accountable!"

6. He doesn’t have any goals or plans for his future.

He doesn’t need a ten-year plan, but you want to see that he has some ideas of what he wants in the future. You don’t want to marry someone who doesn’t leave their couch and has no desire to keep a job. You also want to see if your goals and plans for your future align with his. My friend Kim wanted to be a missionary in Asia. She was careful to look for a man who wanted the same thing that she did. Now they live in Asia evangelizing on college campuses.

Sometimes the red flags are big and waving high, and sometimes they are hidden under the surface and will only be discovered over time. I encourage you to pay attention to them, no matter how small they may seem. Desiring to be fully known and fully loved in marriage is a good thing. This is a God-given desire!  But small behaviors are indicative of larger behavioral patterns, and ignoring these red flags could be costly in the long run.

What red flag would you add to this list? Tell me your story in the comments. I'd love to chat with you!

I’m thrilled to introduce the Authentic Intimacy community to our new Director of Discipleship, Joy S...

Three Things I (Wish I Hadn't) Learned From Pornography

When I was a fifth grader, my friend opened my laptop and introduced me to pornography. At the time, I didn...

3 Reasons To Invite Women Into Conversations About Sexual Brokenness

by Joy Skarka I opened my door and there she stood. She was nervous. I invited her inside my home, offer...