3 Reasons Women Tend To Take Over in Marriage

The first in a 3-part series from "Finding the Hero in Your Husband, Revisited."*

Author Margo Kaufman once wrote, “The only thing worse than a man you can’t control is a man you can.” I’ve experienced this bind. Have you? I desperately want to build the hero in my husband. I want to see his strength, but I find myself too afraid and too proud to trust him. 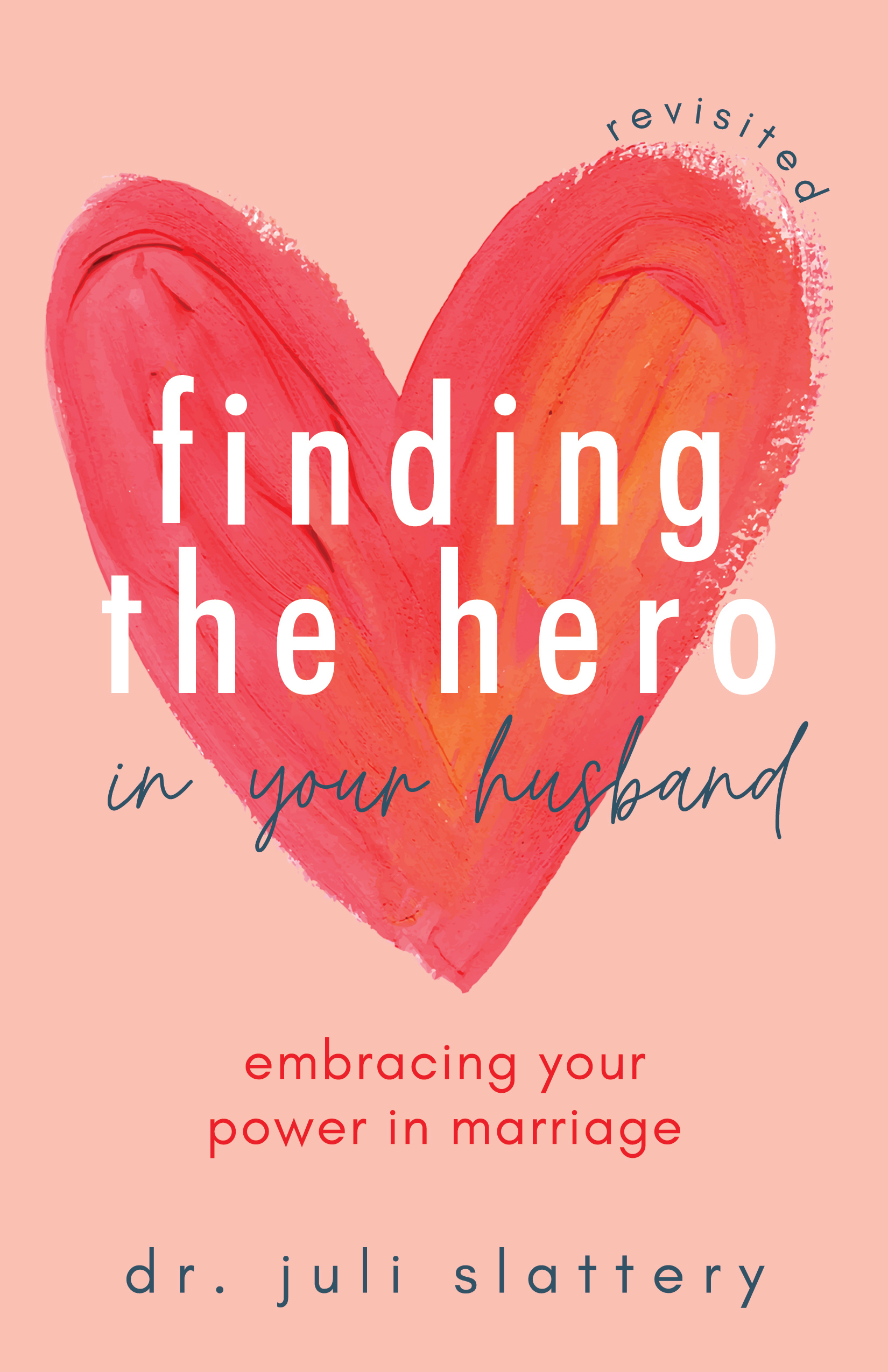 While women often jockey to be in charge, we sometimes hate where it leads us in marriage. I was recently talking with a friend in her late forties who shared honestly, “I’m just tired! I don’t want to do this anymore. The kids ask me for everything. They never go to their dad. Even when he tries to help them, they brush him off. Why do I have to carry all the stress of our home?”

Every marriage has a power balance between a man and woman. We need to be very aware of how a dominant husband can be destructive in marriage, but the opposite is also true. Intimacy in marriage means that both the husband and wife assume their God-given power and use it to build rather than tear down.

If men want to be a hero and women want to be married to a hero, then why can’t they just make that happen? Why do we find ourselves sabotaging the very strength we hope to see in our husbands? Here are a few reasons why:

While this cultural moment is no champion of marriage by God’s design, the tension of women taking over is definitely not a new one. We can look way back to how marriage first went wrong in the Garden of Eden. Dr. Larry Crabb wrote a book called “The Silence of Adam” in which he asks the question, where was Adam when his wife was first deceived by the serpent? Adam’s passivity was as great a problem as Eve’s infamous bite. When God confronted the couple in Genesis 3, Adam blamed his wife rather than taking responsibility for his own lack of initiative and integrity.

We can see in Genesis 3:16 that the Fall resulted in a disordered relationship between every husband and wife. God said to the woman, “Your desire will be for your husband, but he will rule over you.” Instead of co-reigning together to subdue the earth, a husband and his wife would now wrestle continually with the tension of wanting to subdue one another.

At the risk of sounding dramatic, the power struggle so common in marriage is demonic. God’s enemy, Satan, will aim to destroy everything God made as holy and perfect. Your marriage is no exception. The last thing Satan wants is for you and your husband to experience the perfection of interacting as God designed a husband and wife to love each other.

Our own sinfulness is the often unconscious decision to collude with Satan against God’s design rather than trusting Him to lead us into the fulfillment of that design. And so along with the first wife, we experience the tension of longing for our husband to be a hero while also wanting to dismantle his power. We place our husbands in a diabolical double bind: I want you to lead, but to lead the way I tell you to lead.

God’s design for marriage exposes both a man’s and woman’s deepest fears. While marriage asks a man to step into the role of hero, he often lacks the skills and mentors that can guide him into becoming one. What does it look like to be a good husband? Father? Where are the role models for men to follow? No man wants to attempt something new if he doesn’t have a roadmap to success. As one young man recently told me, “Better to play it safe.” Does this give him an excuse for his lack of engagement and responsibility? No, but it may help you understand why he’s not “manning up.”

Woman: I’d really like to see you take some ownership and responsibility for our marriage.

Man: No you wouldn’t. The few times I’ve tried to step up, you quickly let me know how I’m not doing things the way you think I should. It’s never good enough for you, so I’ll just let you have it your way.

Woman: Well, you should know how to do things right. If I wait around for you to figure this out, our family, our finances, and my heart will be a mess. I feel a lot better just taking care of things myself.

Man: Fine with me! I have plenty of other things I’d rather spend my energy on.

And so they settle into an unspoken truce that keeps them both safe, but nowhere close to intimate. Can you relate?

“How many children do you have?” Women are known to humorously reply to this question, “Four, including my husband.” Now just imagine for a moment that a man answered the question this way, including his wife among the “children” in the home.  Why is it funny for a wife to refer to her husband as a child but unthinkable for a man to tell this same joke?

Women justify a marriage takeover when their husbands have proven that they either don’t want to or can’t handle the responsibility. She slides into “mom” mode, complaining how she is married to an adolescent. Addressing this problem in your marriage begins by acknowledging that your husband isn’t the only one who needs to grow up. Yes, you can point to a hundred ways that you may be more responsible and mature than he is. While your frustration may be justified, it also probably points to your own immaturity. I know because I’ve been there.

When Mike and I got married, I appeared on the surface to be more mature than he was. I was goal-oriented, knew what I wanted from life, and had been a Christian far longer than my husband. As much as I loved Mike’s laid-back approach to life when we were dating, I wasn’t such a fan once we were married. I complained about always having to be the serious one — the responsible one.

I remember one incident that represented the early years of our marriage. Mike and I lived in a two-story townhouse. We agreed that we would clean the house together on Saturdays — he would clean the upstairs, and I would clean the downstairs. Along came Saturday. After breakfast, I grabbed the cleaning supplies and tackled my part of the house. Mike turned on the TV. Long after I had finished my part of the house, Mike decided to go for a run, and then lunch, and then a nap. As the hours wore on, I got more and more angry. By about 9 p.m., I self-righteously grabbed the cleaning supplies and began working on the upstairs. I’m sure I sighed loudly and slammed cupboards, letting my new husband know what a martyr he had married. I was so mad at my husband that I slept on the couch that night. I really lost it when Mike came downstairs the next morning, chuckling at me sprawled on the couch and said, “Well, I got a good night’s sleep!

In the weeks and months that followed, Mike and I hashed out this ongoing issue so perfectly displayed by the cleaning episode. I learned that my husband wasn’t the only one who needed to grow up. I could be controlling and manipulative in my expectations, sparking my husband to respond with passive-aggressive stubbornness.

I may have been more subtle in how I demanded my way, but I was really acting no more grown up than Mike was. I saw myself as taking the “high road” by proving to Mike and myself how much more responsible I was than he was. True maturity would have been to confront the issue with honesty and a willingness to understand what was going on inside my husband’s heart.

Truth be told, we all have a bratty, selfish, sinful kid inside of us.

We'll talk more about these strategies next time (read Part 2), but here's a sneak peek: we may be bossy, we may be controlling, we may use sarcasm and mind tricks, we constantly rescue them, we constantly punish them, or we’re the ultimate backseat driver. Which one can you relate to?

For now, here are a few questions and Scripture passages to think about:

Join an online book study and go through "Finding the Hero in Your Husband" with a group of like-minded women this winter!

This excerpt is from Dr. Juli Slattery’s book, "Finding the Hero in Your Husband, Revisited.” Reprinted with permission from Health Communications, Inc.