Is There a Christian Version of Barbie? 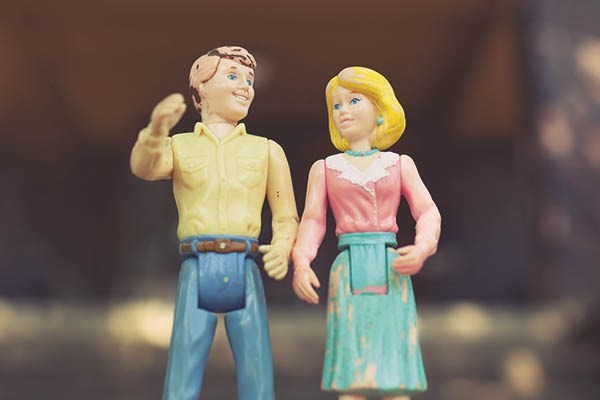 This past year, Barbie has been in the news. For 57 years, this plastic woman has projected the ideal and unattainable image for American girls. The Daily Mail reported in 2013; a real-life Barbie would have “bones so frail it would be impossible to walk and would have room for only half a liver.”  Over the past few years, there has been a massive outcry against Mattel, claiming that Barbie contributes to eating disorders and a distorted view of the female body. Finally, the toy company is taking action. Earlier this year, they announced the production of three new Barbies, petite, tall and curvy.

As a forty-six-year-old woman, Barbie doesn’t bother me. I remember younger years in which I obsessed about my body. I inherited “saddle bags” on my hips, small breasts and short legs. Not exactly “Barbie-esque.” Today I fight the pressure of a different type of Barbie. I’ll call her “Biblie,” the Christian version of Barbie.

Biblie doesn’t have set physical dimensions that I must live up to. Her standards are not tangible but no less demanding. Let me give you four snapshots of how Biblie has haunted me.

I was a senior at a Christian high school, giving a graduation speech. At the end of the speech, the principal said to my mother, “Wow! That was a great speech. Juli is so gifted. It’s too bad she isn’t a guy; she would have made a great pastor.”

What I learned: My gifts don’t fit my gender. Did God make a mistake?

I was a freshman in college at Wheaton. After tennis practice, the rest of the team and I went to the dining hall for dinner. My teammates and I sat across the table from some guys from the soccer team, one I had my eye on. We began discussing something from one of our classes, which led to a debate. I can’t remember whether it was philosophy or theology, but I loved discussing ideas.

As we left the table, one of my friends pulled me aside and said, “Juli, if you want him to like you, you can’t talk about things like you do. He’s intimidated by you. Guys don’t like girls who challenge them.” My friend was right. This guy began avoiding me.

What I learned: Biblie needs to be careful about appearing too strong, intellectual or opinionated. Christian guys are attracted to weak women.

Tweet this: Christian women who love God come with all different gifts, personalities, and walks of life. @DrJuliSlattery http://ctt.ec/WDxba+

I was in my early thirties and my oldest son in kindergarten. (By God’s grace, I met and married a man who liked my intellect!) The teacher came up with the brilliant idea that the class would perform a teddy bear play for the elementary school. Each mom was supposed to make or find a teddy bear costume for her Kindergarten student. Well, this mama never learned how to sew. I’m not crafty, and I’m not creative. I put off the project, remembering that I had a Winnie the Pooh costume in the closet. The night before the costume was due; I got the Pooh costume out to find that it was a size 2. The bigger costume that fit my son was Tigger. In the crunch I sent my son with the Tigger costume (and a T-shirt to wear over it that said “Pooh bear.”) When I picked up my son from school, he was in tears. His teacher had scolded him for not having an appropriate bear costume and told him that another mom would make the costume for him.

What I learned: I failed my son. I don’t measure up. Biblie would have labored to create an elaborate costume!

After twenty years of having short hair, I recently decided to grow mine out. Why? The truth is, I wanted to look more feminine. Most of my friends have long, flowing hair. Deep down, I believe a true Biblie would have long, beautiful hair, instead of my pixie cut.

I only lasted a few months before I cut my hair short again. My good friends and my husband all told me, “You look great with short hair.” I also love that my hair takes exactly five minutes to fix in the morning! I love to hike, run and swim and not fuss with my hair.

What I learned: I’m not a stereotypically feminine woman. Even at 46, I’m a tomboy. I’d rather watch a football game than go to a tea party. Does that make me less of a woman of God?

While we wrestle with the body image presented by Barbie, I think the struggle of what it means to be a woman goes a lot deeper. Cultural expectations and Christian projections of what a woman “should be” make us feel insecure and uncomfortable in our skin. Your struggles may be different. Maybe Biblie haunts you because she’s married and you are single. Or her past is squeaky clean, and yours is full of garbage.

What I've again and again had to ask is, “Is this standard God’s or people’s?” Does God care if I can sew a teddy bear costume? Does it offend Him that I’m athletic or that I love to talk about deep concepts? Is He limited in how He can use me because of my gender or because I have short hair?

God made us with wonderful variety, even within our gender. I love my friends who sew, decorate beautiful homes, put on elaborate feasts and would rather read Jen Hatmaker than AW Tozer. I love my single friends who serve the Lord faithfully in their churches and communities. I even like their long, flowing hair, but that’s not me.  God has set the standard of godliness and righteousness. Let’s take a lesson from Barbie and get rid of “Biblie.” Christian women who love God come with all different gifts, personalities and walks of life. Let’s give each other room to serve the Lord exactly as He made us.

When the words “Christian” and “counseling” are mentioned in the same sentence, the...